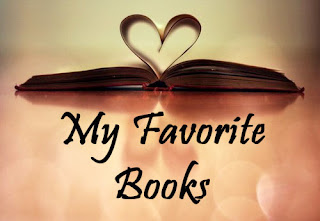 We all have them, those books we love so much that we could read them over and over again. They are the stories that touch us the most, that take over our dreams and our realities even when we read them. They are our favorites.

I've been too impulsive in the past to declare a book a favorite, so now my favorites need to pass my re-read test.
In other words: if I still love a book the second time around, then it's a favorite.


Books That Have Passed The Test
The books that I have listed below are books that have passed my requirements within the past few years.  They are organized by genre.
Click on any of these shelves below to see the books I love!

Possible Book Favorites
These are books I've only read once, some recently, others long ago. They gave excellent first impressions, and I loved them when I read them, but now that the initial "Wow!" factor has worn off, they need to pass the re-read test and wow me again. Only then will they make it to the elite.

★★★★: The book had some excellent qualities, but I couldn't quite bring myself to love it. I might reread it.

★★★ 1/2: These books exceeded my expectations. I'm not sure I would re-read it, but I would still recommend it.

★★★: The average, likeable read. Enjoyable, but not necessarily memorable.

★★ 1/2: Almost, but not quite enjoyable. There was something about it that I couldn't bring myself to like.

★★: This story fell flat. Definitely Meh. Maybe someone else would like it.

★: Absolutely hated it. There are some serious problems with the story that I couldn't ignore.

The Fall of the Roman Empire: A New History of Rome and the Barbarians
by Peter Heather
tagged: currently-reading and non-fiction